It's dusty in the studios at the moment. Very dusty. Or at least it was yesterday. I came back with the stuff caked in my hair and all over my hands and I felt an overwhelming need to jump in the shower and rid myself of the grime. I didn't. Didn't see the point... my house is just as bad. So I made do with combing my hair through with a wet brush and donning a change of clothes. Today I've escaped to a little cafe bookshop just down the road, and I'm pondering what to wri

A street with character and personality

On Tuesday the 21st of February at 11.00am we launch our latest commission. Jenny and Alison went to chat to Katie at Baby Bird Cafe now there is only one week to go. Q: When did Baby Bird CIC open, and why did you open it? It was opened at the end of August 2014, mainly due to having my daughter and finding lots of places difficult to access. I wanted to create somewhere with plenty of space for baby-buggies – to park and turn-around in, and baby-changing facilities. But

January holds the highest rate of suicides over any other month of the year. It is The Samaritans who keep track of the suicide statistics for the UK. January 16th, the most depressing day in the calendar, is apparently dubbed 'Blue Monday'. My 'Blue Monday' arrived a week later. It came in the form of an email which I took personally, sending my head into a spin... I found myself unable to stop thinking about it... You know that letter you never meant to send, or the one y

A new commissions begins. Expectations are high, where do we start? We had worked with Coverage Care previously when New Fairholme opened in Oswestry, so we had an understanding of how we can work together and knowledge of each others working processes. Photo: Taken at New Fairholme, Oswestry Of the many reasons we have been keen to work with you, this incudes; An excellent experience of working with you when we transitioned services from Fairholme to the New Fairholme Your v

From a handful of hours

Tucked away in central Oswestry is Designs in Mind, a vibrant, inspirational place where I choose to volunteer some of my time each week. In this studio is the belly of the beast where beautiful things happen. It is the nerve centre of a wonderful project that I first discovered ten years ago as a member. Here I have learnt the art of listening and the value of shared experiences; and continue to learn what inspires me and how to inspire others. As I journeyed down my road to 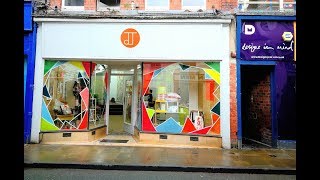 The Queens Award for Voluntary Service